CHRISTMAS MOVIES and horror go well together, and there is a long tradition of great Christmas horror films. Gremlins is the gold standard and showed a good Christmas horror has a good amount of comedy.

If you are looking for a more traditional Christmas movie over the next few weeks there is Klaus on Netflix, which is a bit more in the vein of Elf than Black Christmas, 2019’s stab at the Christmas horror genre.

This is a remake of the 1974’s Black Christmas, not to be confused with Mario Barber’s Black Sabbath (sometimes called Black Christmas ) nor does it have anything to do with the other remake from 2006. The 2006 version was absolutely awful but did have a great tag line misquoting Wham: “Last Christmas I gave you my heart… this year I want your eyeballs.”

'The sexual assault angle is quite heavy, but it is handled well and with tact - a female writing pair and director are surely to thank for that'

That was the only good thing about that movie and the remake here takes a much better go at channelling the original's themes and ideas.The plot is fairly basic. A house of sorority girls are being picked off one by one after they do a Christmas show accusing the president of one of the fraternities on campus of sexual assault. This is the same plot as the 1974 version but updated for 2019 - for example they are harassed on social media before they are taken out. 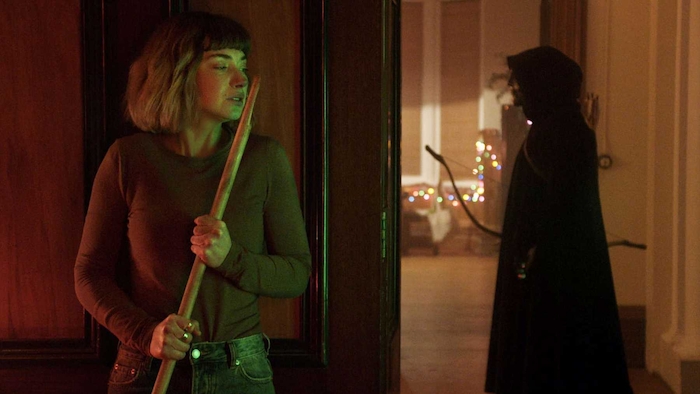 To its credit the movie takes a turn about 30 minutes from the ending and goes enjoyable bonkers. The original it had some very progressive politics hidden for the 1970s, here they are not so subtle but still did not feel forced. They have a lot of fun with the feminist themes, I enjoyed the fact that a sorority is now a bastion of feminism on this campus, and one of the main villains, an obnoxious misogynistic lecturer, played by Cary Elwes, has great fun channelling Jordan Peterson.

The film is bound to irritate some people but that is part of the fun. The sexual assault angle is quite heavy and the reason it is rated 15 here in Ireland, but it is handled well and with tact - a female writing pair and director are surely to thank for that. It takes it seriously but it does not bog down the film either. On the other hand, the horror itself does feel a little tame - the film is PG 13 in the USA. The viewer is never truly afraid at any point.

Black Christmas, although the sorority girls are picked off at quite an alarming rate. It is not quite as good as I wanted it to be, but it is not bad. You may probably be better off tracking down a copy of Gremlins.