The Claddagh is Galway’s most historic district, its foundation pre-dating that of the city, and it has always been proud of its native traditions and identity. Yet not only is the Claddagh a vivid link to Galway’s ancient past; the Claddagh National School, with its multi-racial student population, symbolises the cosmopolitan Galway of today while preparing its pupils for the Galway of tomorrow.

Claddagh National School is a mini-UN with pupils from more than 30 countries in its classrooms, including Albania, Armenia, Congo, Croatia, Ethiopia, France, Germany, India, Israel, Nepal, Palestine, Poland, Russia, South Africa, Turkey, Venezuela, and Zimbabwe. Those pupils span children in the direct provision system, those whose parents are visiting academics at NUIG, and, a more recent trend, from EU-based families availing of “educational tourism”.

Many of these children arrive with limited English and, to help them catch up with their classmates, the school employs two, job-sharing, English as an Additional Language teachers, Maureen Browne and Annie Asgard.

Last week Annie Asgard, a Language Teacher of the Year award-winner under the EU’s Language Label programme, sat down with me and described the challenges and rewards of having a rainbow coalition of nationalities in the classroom. Annie’s own life story makes her the perfect teacher to assist immigrant children as she herself has experienced emigration, discrimination, uprootedness and learning a new language in a strange country.

'I can empathise with kids here, and instead of getting them to fit into a box I want them to make their own space for themselves where difference is beautiful rather than strange and they can be proud of whatever it is that they are'

“I was born in Tehran,” she tells me. “My parents met there when they were attending medical school. They were both Azeri, an ethnic minority who are discriminated against, similar to the Kurds. They emigrated to the US when I was four; my dad became a urologist and my mother ran a trauma centre in Philadelphia where I grew up. I was one of two Iranian kids in a 90 per cent Jewish area. I learned English in school; I have clear memories of going to school and not knowing English.”

When she was just 10 years of age, the hostage crisis in the US embassy in Tehran began and Annie was exposed to sudden prejudice and hostility. “It was on the news every day and I was called every nasty racist name you can imagine,” she recalls. “I can hear them still and it brings a voice to the children that I teach here so I am highly sensitive to that.”

Aged 20, Annie took US citizenship, exchanging her birth-name, Anahita Asgharzadeh, for the European sounding Annie Asgard. “I do regret changing my name, in particular my first name, but it was the stupidity and shame of my youth that made me do it,” she admits. “I was so ashamed of being Iranian because of how hated Iran was in my teenage years. I didn't have anyone to talk to me about it. So I can empathise with kids here, and instead of getting them to fit into a box I want them to make their own space for themselves where difference is beautiful rather than strange and they can be proud of whatever it is that they are.”

When she was 21, Annie left the US embarking on a nomadic life that eventually led to Ireland. “I taught in the Caribbean, then Japan for five years. I relate to that feeling of cultural and linguistic uprootedness. Leon Russell has a song, ‘Stranger in a Strange Land’, and that’s me; I feel comfortable being the outsider. In Japan I met an Irishman, and we’ve been married now for 20 years with two kids. We came to Galway in 2002 and I started working in the Claddagh National School in 2006.”

Annie is currently doing a PhD on the topic of cultural and linguistic identity development in primary school students in Ireland who come from ethnically diverse backgrounds. At Claddagh National School, her EAL colleague is Maureen Browne, also famed as founder and leader of acclaimed music ensemble BackWest. “She is a fine Claddagh woman, a fantastic, amazing, person!” Annie enthuses. “We’re a team.” 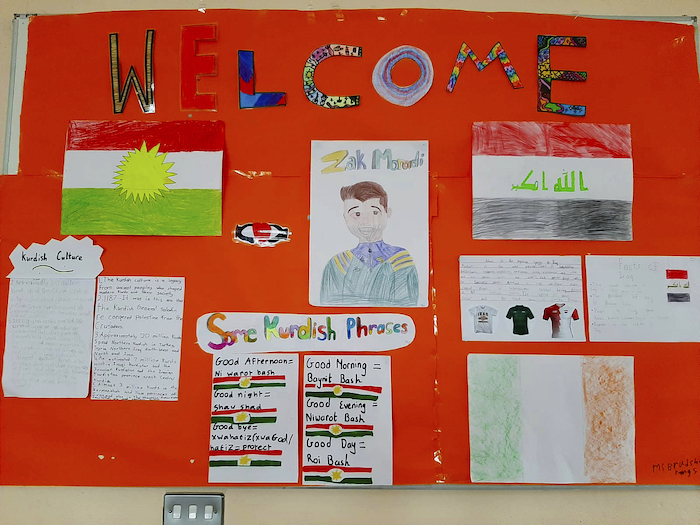 The Claddagh community has responded generously to the influx of new nationalities to the school. “The traditional Claddagh families are incredibly welcoming and open to people from all backgrounds and all levels of need,” Annie says, admiringly. “We also have four special classes here for children on the autistic spectrum and we have kids coming in from Tuam, Ballinasloe, Loughrea, etc, because there would be no school in their local area catering for that. As regards migrants, we have things like mixed cooking classes where locals would teach immigrants to make Irish soda bread and incomers would show how to make an African dish. There is a mixed knitting group of locals and migrants and the community choir has African women as well as Claddagh women.”

Galway Lions Club have been generous benefactors of the direct provision children in the school; “Two years ago Frank Conlon from the Lions Club asked me to speak to them about direct provision,” Annie relates. “They then fundraised and sent our DP kids to summer camp and each kid could pick a friend from their class to join them. Two years ago they all went to Dublin Zoo and last year it was Westport House.”

While some of the Claddagh pupils are from refugee/asylum seeker families, others are from moneyed EU parents; “Lately we have what we call ‘educational tourism’,” Annie explains. “Children from wealthy Italian, Spanish, French or German families aimed at a bilingual secondary school in their home country which needs them to pass an entrance exam. As EU citizens they can enter the school system here for free so they come here with one parent while the other stays working in their homeland. They rent an AirBnb or do a house swap for a period of time and we teach their kids. The issues around that are if they arrive after October 1st we get no capitation grant and it can be a drain on school resources.”

As someone who encountered racism herself, how does Annie prepare her pupils for dealing with it? “That type of message comes from a lack of education and knowledge, it can be unlearned,” she states. “We have a subject in the curriculum called social personal health education, though it only gets 30 minutes a week while religious education gets 30 minutes a day. I am doing lessons with kids, and in Claddagh they are in a safe space where they are accepted, but some of them may go to a school where they encounter racism for the first time and I want to give them a little bit of armour before they go there.”

To quote from the Leon Russell song Annie cited earlier in our interview: "Stop racing toward oblivion/Oh, such a sad, sad state we're in/And that's a thing/Do you recognize the bells of truth/When you hear them ring/Won't you stop and listen/To the children sing."

Let all Galway listen to the song that the Claddagh National School children sing.