JULIE IS a film student in London in the late 1980s. She is trying to escape her life of privilege, but lives in her parents' flat in Knightsbridge. Yet, her attempts to make a film in Sunderland about a working class family are honest and admirable.

While at a party she runs into Anthony (Tom Burke ). He seems like a character from a Le Carré novel, or certainly likes to appear that way. He tells her he works for the Home Office and slowly worms his way into her life, and eventually her apartment. We know there is something wrong and suspicious about him. But we (I assume ) are a lot older than Julie and can see these signs. Over time it is revealed he has a terrible secret.

Knowing that The Souvenir is based on director Joanna Hogg's life makes it even more devastating. Hogg’s old friend from real life, Tilda Swinton (she was in her first film in film school ), plays Julie's mother, and newcomer Honor Swinton-Byrne plays Julie. What a debut it is. She is helped by Hogg of course, who was able to give her first hand information on how she felt.

'Tom Burke, as Anthony, delivers a really cracking performance. He is very charismatic, selfish, and has moments of incredible cruelty'

Anthony's terrible secret is revealed to Julie at a dinner party. Julie does not understand at first, but tells an incredible story with her face, while continuing her conversation, acting like she knew all long. Hogg filmed the movie in sequence and in that particular scene had not told Swinton the revelation in advance of shooting the scene. It seems unfair to do that to a young actor but you cannot argue with the results. 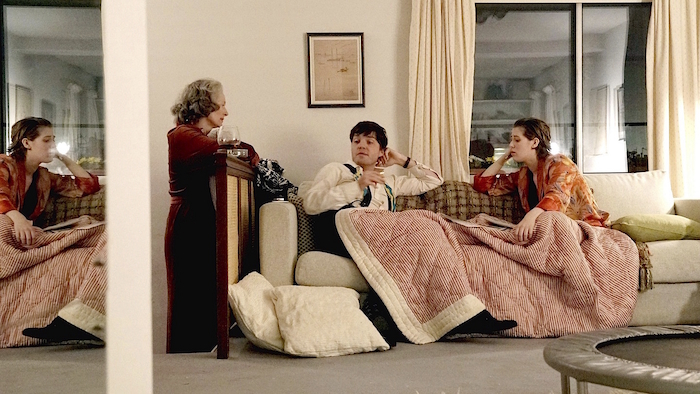 While Julie is naïve she is aware of how much a brute Anthony is. It is this which makes the film so believable, he is not some Machiavellian villain, she is aware of his flaws and how he treats her. However you get the feeling she is not quite aware of the damage he is doing to her. Of course the audience is, and it is excruciating to watch.

Burke delivers a really cracking performance. He is very charismatic, selfish, and has moments of incredible cruelty. He even blames her for “inviting him to torture her”, but also he has moments of tenderness, he makes her laugh and he gets on well and very realistically with Julie's parents. I found this film to be terribly moving and certainly one of my favourites of the year so far. It is a brave film from one of the best directors working today.