MAX, THOR, and Lucas, are three best friends about to enter their teenage years. They struggle with hormones and growing up. They know lots of grown up words but not exactly what they mean: “She’s a nymphomaniac, it means she has sex on land AND on water."

The hyper kid, Thor, who has an interest in musical theatre, is too shy to admit he cares about the school musical. The sensitive one is Lucas. His parents are getting a divorce and he does not have the same wild streak as the other two boys. One great gag is him singing 'Walking On Sunshine' with his class while tears stream down his face. Max, essentially the lead, is a love struck hormonal kid. There are many many clichés at work here, but isn’t that the genre? If it is funny, who cares?

This is essentially Superbad or Ferris Bueller's Day Off for 10/11 year olds. I will never not find children cursing funny so when they drop the F word in the first few lines I was pretty much on board. The movie is extremely vulgar, yet tasteful enough not to be gross, and not exploitive of the cast (aged c11 ). The script does have my favourite insult ever used in a film, involving one of the bully's mother's cook book.

'Comedies are easy to forgive. If you leave the cinema having a few laughs you cannot really say you did not have a good time'

Of course not all the jokes land. While I admire the decision to concentrate on the three children I would like to have seen more of some of the co-stars. Will Forte is one of the funniest people on the planet right now and only in for about 10 minutes (and of course gets the biggest laughs of the movie in those minutes ), Retta and Sam Richardson also give great supporting moments.I would also rather have spent the majority of the film with the two women. Molly Gordon and Midori Francis have fantastic chemistry and I’m looking forward to seeing what they both do next, hopefully something together. 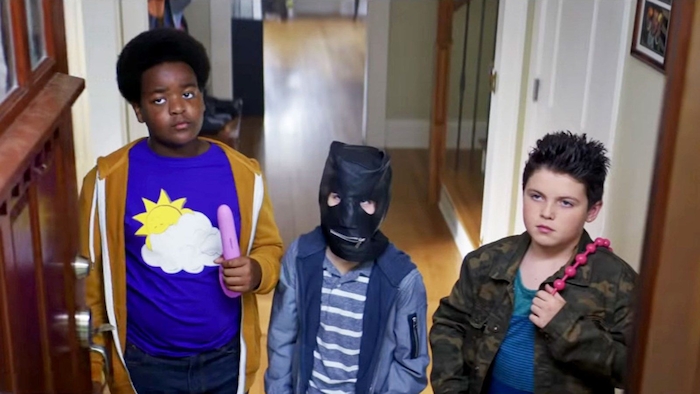 One thing bugging me, and I suppose it shouldn’t really, but there was a movie out earlier this year that was similar, called Booksmart, and it did everything this film wanted to do but better. It is not available to stream yet but when it does, please seek it out, it is a film that deserves to find its audience.

Comedies are easy to forgive. If you leave the cinema having a few laughs and enjoying hanging out with the characters you cannot really say you did not have a good time. Good Boys is not a great movie but it is funny and in a reasonably lacklustre summer, it is a great one for the children before they go back to school.