KNEEHIGH THEATRE Company's Dead Dog In A Suitcase was one of the hottest tickets at this year's Galway International Arts Festival. Adapted by Carl Grose and composer Charles Hazlewood, it was a raucous adaptation of John Gay’s 18th century classic, The Beggar’s Opera.

Kneehigh give the play a modern day setting with the action played out and around multi-level scaffolding designed by Michael Vale. Directed by Mike Shepherd, Gay’s characters retain their vividness in their new guise and its depiction of a world of hit-men, dancing girls, and political skulduggery is as punchy and trenchant as ever.

At the hearts of the action is arch villain McHeath played with charisma by Dominick Marsh. A practised liar and philanderer, McHeath repeatedly evades capture as he betrays one person after another. Matching him for dastardliness is mayoral hopeful Les Peachum (Martin Hyder ) and his ruthless wife (Rina Fatania ) in a leopard-print outfit.

Also impressive in the large cast was Georgia Frost as Filch, the gangster with a humane streak. Kneehigh add one new character, Widow Goodman, who doggedly pursues McHeath after his murder of her husband and she is a strong presence throughout the piece in her unfailing quest for justice.

Hazlewood’s eclectic live music score takes in everything from ska, to trip hop, and punk, and kept the action powering along. There were times however when the music was too raucous and overwhelmed the vocals. Overall, this still remained an enjoyable, energetic production, if not quite hitting the heights of Kneehigh's GIAF 2017 show, Tristan & Yseult. 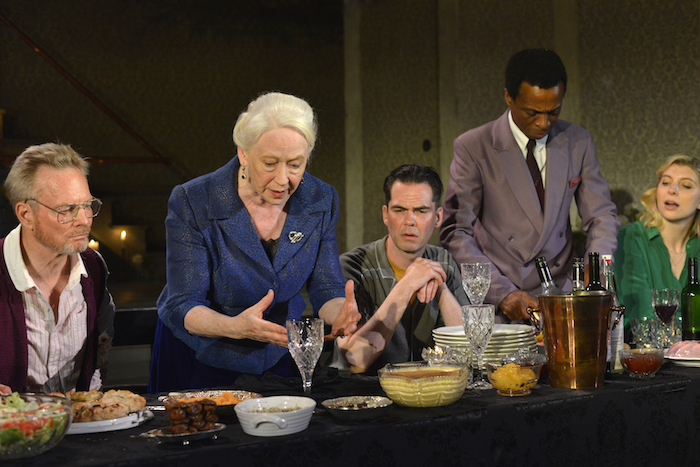 Druid’s world premiere of Epiphany by US author Brian Watkins is an ambitious, absorbing, and often very funny play. Inspired by Joyce’s The Dead, it features a celebratory gathering of a disparate group of characters, several of whom retain the names featured in Joyce’s story.

At the heart of the drama is Morkan (beautifully played by Marie Mullen ) who has invited an assortment of friends for an Epiphany feast – though it soon becomes clear that no-one present really knows what the feast symbolises. As Morkan scattily tries to juggle making the meal and being a good host, the guests converse about matters light and matters philosophical in a way that sometimes remind one of Woody Allen's Hannah and Her Sisters. The multi-national nature of the cast creates a sense that they represent humanity in general rather than residents of a specific city. 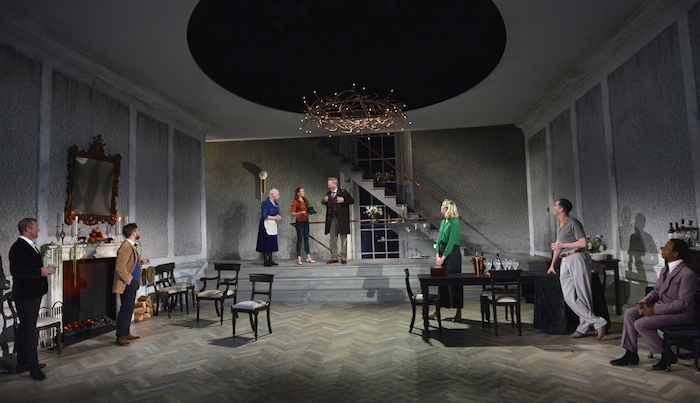 Watkins skilfully absorbs his Joycean influences while also creating a drama that stands on its own merits and crafts moments just as moving as those from the original story. Garry Hynes directs her fine cast with her customary flair, with Marty Rea’s Kelly is a standout along with Marie Mullen.

Francis O’Connor’s spacious set featured a zigzagging stairway leading to levels both above and below the room where characters converge and a long table where they sat, a la The Last Supper, to dine and talk.

Epiphany continues at the Town Hall Theatre until Saturday. for tickets see www.giaf.ie