IT HAS become almost a tradition now that the Galway Film Fleadh closes with a western. Being one of my favourite genres I have no problem with that, but Never Grow Old has a lot to live up to after last year's Black 47 and 2017's An Klondike.

The film centres around Irishman Patrick Tate, an undertaker and carpenter in Garlow, Oregon, on the California trail. The town has recently become dry under the eye of a hellfire and brimstone preacher who has also banned solicitation and gambling. Removing those vices is not good for Patrick's business, but when bank robber Dutch Albert rides into town with his posse, looking for an old partner, things are about to change.

Seeing potential in a bar-less brothel-less town they decide to stick around. They re-open the saloon and fill the brothel and soon enough business is booming. Money gambling and women have knock-on effects. One of them is a busy undertaker. Patrick is happy his work is picking up but his wife is anxious to move on to California. Patrick agrees, but wants to earn as much as he can before he goes. Tensions are flaring up in the town and soon enough it is too late to walk away.

John Cusack plays Dutch Albert and it is a fantastic role, probably the best Cusack has been in this century. He is funny and scary in equal measure, and barely raises his voice above a whisper for the duration of the film. He is happy to point out what his gang's ways have done for Patrick's wallet, giving him a slightly libertarian, almost Trumpian, feel.

Emile Hirsh plays Patrick and has a bit of trouble with the accent, but is aided by his character being pretty monosyllabic. His wife played, again adequately, by Débroah Francois. The rest of the cast are excellent, particularly a quite useless but well meaning sheriff played by Tim Ahern.

Never Grow Old is a fine western and hard to believe it was filmed just outside Galway. It reminded me of the great HBO series Deadwood and that is excellent company to be in. It is a mud and blood western rather than a sunny spaghetti one and you can feel the heavy weight of mud while watching. 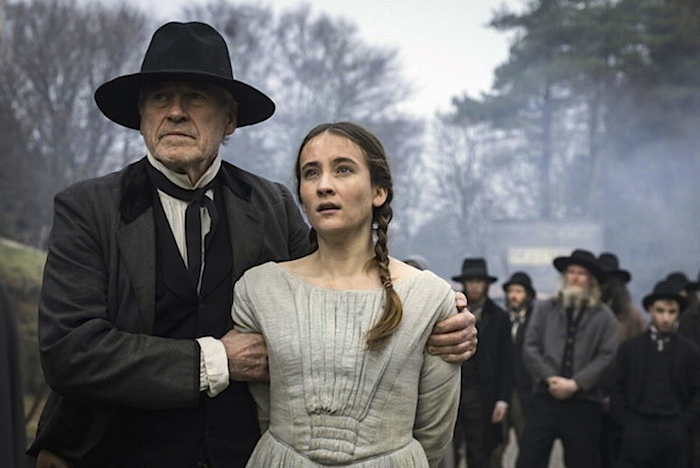 However the script did not always work, and twice, sexual assault or threat of sexual violence, was used as a plot device - a little bit tiring in the current climate, particularly with its leading man's problematic past. Yet, Irish director Ivan Kanavagh has a great eye and the film is particularly well lit - filmed in November/December in Galway we are all too familiar with that kind of darkenss. Kanavagh also wrote the film and must be given credit for pulling such a great performance from Cusack.