LEADING GALWAY theatre practitioners, such as Little John Nee, Gerry Conneely, and Hot Potato Productions, have shows at the new Summer Drama Festival in The Cube, NUI Galway, from July 19 to 27. 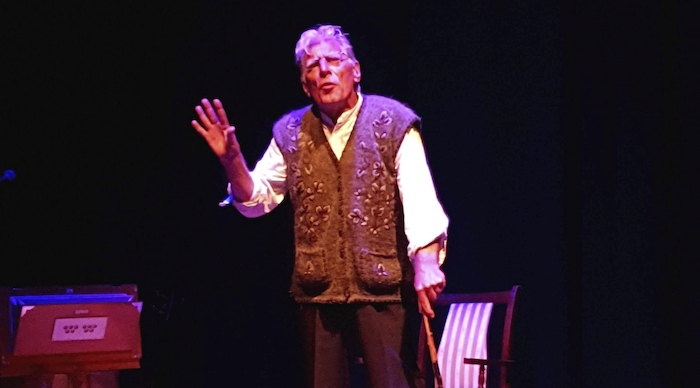 Little John Nee will perform Small Halls and Potholes, an evening of eccentric songs and strange stories, celebrating all that is "weird and wonderful about the Irish summer" (July 21, 9.30pm ). Gerry Conneely [pictured above] will present two one act plays - Shakespeare in Connemara and Fashion Show (July 22, 23, 26, at 9.30pm ), and the one man show, The Great Push, based on the experiences of Irish journalist Patrick McGills in WWI (July 24, 1pm and 25, 4pm ).

Hot Potato Productions reprise the award-winning Just Guff, by Jim Ward, about a dedicated member of a political party who sees his certainty in that party shattered (July 27, 1pm and 9pm ); The direct provision system will be explored in Visionation’s Behind Closed Doors, which was devised with actors who are living in direct provision in Galway (July 22, 6pm, and 23, 1pm ).

NUIG Dramsoc will stage John Breen's much loved Alone It Stands, exploring Munster's legendary defeat of New Zealand in 1978 (July 24, 25, 9.30pm ); Eibhleann Caffrey will stage Recognition, focussing on the trials and tribulations of two college students (July 20, 9.30pm; and 22, 1pm ); War/war/war student theatre company will stage From There We Saw The Stars, inspired by Dante’s Inferno and exploring ideas of spirituality (July 19, 1pm and 9.30pm ). For children there is Marty Moncrieff the Teddy Bear Thief from Beluga Theatre, which is like a cross between Toy Story and Father Ted (July 20, 12.30pm; July 21, 11am and 1.30pm ).