I WAS pretty nervous about this. It is tough to follow an almost perfect trilogy and it felt completely unnecessary to make a fourth Toy Story. However, Pixar recently fired it's studio head John Lasseter after sexual harassment claims, so right now, the company really needs a win.

I have some reservations about the Toy Story franchise, the movies themselves are absolutely brilliant - well written, full of humour and pathos, and amazingly well voiced by great actors. However what it did was to bring in a new generation of animated movies. CGI movies are much cheaper and faster to make than hand drawn films, but never have the charm of the hand-drawn style of the older Disney movies.

Keep in mind Toy Story came out in 1995 just after Disney had done its best work. The previous few years had been The Little Mermaid, The Lion King, and Aladdin. So when Toy Story blew up, the whole genre transitioned into more generic chldren's movies, with competition from movies like Shrek, Ice Age, and their endless sequels, so I lament the loss of the old hand drawn epics and blame Toy Story.

'The best character here is Bo Peep, brilliantly voiced by Annie Pots. Bo sat out Toy Story 3 and we find out why in the opening scene'

That said, this is a fantastic summer movie. It does not have the gravitas of Toy Story 3 and at no point did I get teary eyed or emotional (unlike Toy Story 2 and especially 3 ). That is not necessarily a bad thing and it is not to say it doesn’t ask existential questions. In Toy Story 3 we saw the toys having to deal with Andy growing up. It is difficult to feel useless and unwanted but it is part of life.

In 4 they have moved on and have a new child in their lives, Bonnie. However questions of life and existence hang over them when Bonnie makes a toy from a plastic fork, pipe cleaners, and googley eyes. Not only that but when Woody meets Boo Peep, who has spent years living on her own as a lost toy he wonders about his own life. Deep. 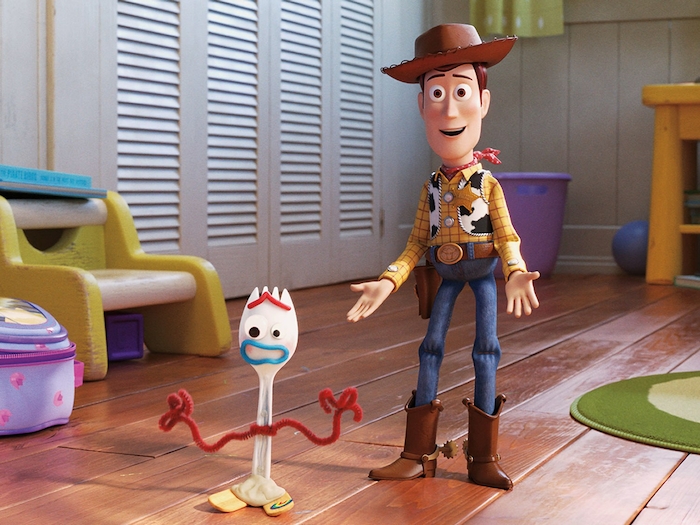 The best character here is Bo Peep, brilliantly voiced by Annie Pots. Bo sat out Toy Story 3 and we find out why in the opening scene. When we meet her as a lost toy she has become street smart and tough.

I often criticise children's movies for having too many jokes for the parents - Shrek and its sequels really suffered from this. Toy Story always had jokes that worked for children and adults rather than a set of jokes for children and then a set over their heads for the parents to enjoy. It does not stop at the jokes. The emotional scenes work for both sets of audience and often for different reasons. It really is remarkably well written.