Nowadays movies being reinterpreted as games is commonplace. You only have to think of the likes of Spiderman, Batman: Arkham, and Star Wars: Battlefront II as examples that went from the big screen to our personal monitors in recent years. However, during the 1990s and early 2000s, it was the opposite that was true with mega games such as the Tomb Raider and Resident Evil series going from pixelated images on non HD TVs to cinema screens. So when Scarface: The World is Yours came out for the PS2 in July 2006, it may not have been one of the first efforts of taking a movie and making it into a game but arguably one the finest.

Unlike previous movie to game adaptions which essentially are just a remake for gameplay, Scarface: The World is Yours takes up an alternate line to Brian De Palma's notorious film where Tony Montana escapes the infamous shootout in the last scene. After escaping the mansion with only the clothes on his back, the player must build his empire from the bottom, becoming the biggest mobster in town, and ultimately securing revenge on those who tried to assassinate him, especially that "cock-a-roach" Alejandro Sosa. Personally, I thought this was a refreshing take as there were plenty of twists and turns, all the storyline is original so game developers Sierra and Radical deserve real kudos for that.

Scarface is very similar to the Grand Theft Auto (GTA ) series, however, it does feel different, as the game does an excellent job in putting the player in Montana's shoes. Every hit carried out, every deal made, and every deal completed is connected in taking over Miami whereas in GTA it feels gamers can do side missions which have really no impact on the main storyline. In Scarface the gamer feels like everything that you do as Montana has meaning.

As for the gameplay, there are a variety of weapons which will keep players occupied and entertained on how to take out their enemies. What I love is the rage mode. For the purists, it makes missions far too easy as rage mode allows Montana to sustain no damage while being able to take out enemies with one shot. However there are certain parts of the game where it is necessary to use the mode. All depends on the player's tastes and abilities. The mode is activated when a player's Balls Metre is full - yes that is its name - and this is obtained through targeting certain body parts (kidney, head, arms, groin, etc, ) gamers will earns balls, and taunting someone after they kill them will earn them more.

As Montana moves his way back up the underworld, the gamer is able to buy properties and turn them into fronts for all manner of illegality, making more money for the gamer who can then hire goons to protect the investment and it is all nicely manageable via a mobile phone. As someone who was not around in the 80s, I assume the developers took liberties with the phone but, hey, it is a game so we can allow for a little creative leeway. Each area will have its own drug demand meaning players can set the price of the product, however, if a player supplies one area with too much, then it is difficult to jack up the price. Considering it is a game based on a drug lord, it is pretty cool addition to the game.

The voice acting is superb but surprisingly, is not carried out by Mr Montana himself, Al Pacino, but he did handpick the voice actor, André Sogliuzzo, for the part. Gamers can also drive a variety of vehicles and listen to the radio which has all of the soundtrack from the film. 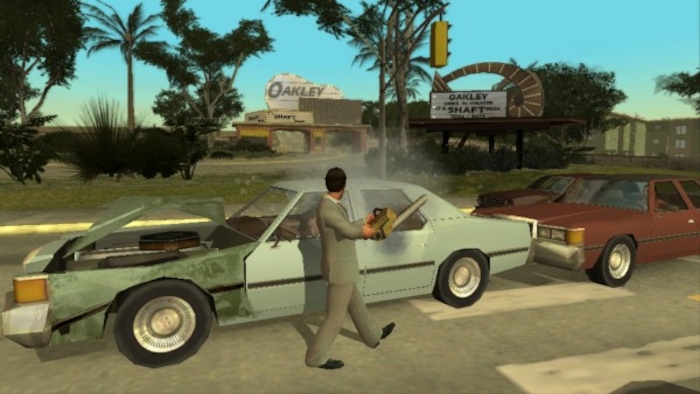 So what did I not like about the game?

OK, there are two things which I did not like. Although being an open world game, certain destinations in Scarface: The World is Yours can only be accessed by one route which means until a player memorises the locations, they will be constantly consulting the game's map.

Another slightly irritating aspect of the game is the Heat mode from police. Now the gamer is a gangster so obviously there is going to be police attention but the Heat mode has two metres on which the gamer must keep an eye. The first metre is a white one which lets the gamer know how close the police is to them. If this metre fills up it will trigger the red metre which will fill up within seconds meaning game over. This mode makes it incredibly difficult to carry missions where there is going to be a lot misbehaviour involved, but then again, it would be a bit worrying if the police looked the other way while a psychopath like Montana was tearing up the city.

For me Scarface: The World is Yours is my favourite movie to game adaption to date and the most enjoyable game I played on the PS2 console. If you are feeling nostalgic and decide to dust off the old console, then try to get your hands on a copy of this game. You will not be disappointed.