One of the guests of honour at next month’s Galway Film Fleadh is Tyne Daly, whose career spans TV, movies and theatre and has seen her garner six Emmy awards (four for Cagney and Lacey, one for Christy, and one for Judging Amy ) and a Tony Award for her Broadway portrayal of Rose in the musical Gypsy.

At the fleadh she will present screenings of Patrick Wang’s double bill A Bread Factory - Part One and A Bread Factory - Part Two, in which she stars as Dorothea who, with her long-time partner, Greta, runs a small-town arts centre which they transformed from an abandoned bread factory 40 years previously. It quickly became the heart of their local community, showcasing theatre, dance, music and film.

Suddenly their very existence is threatened as a wealthy celebrity couple move into town and build an enormous competitive venue, sucking up funding and audiences overnight. Variety hailed the movie as ‘a vibrant and moving drama that’s also an agreeably flaked-out ensemble comedy’ and saluted Tyne Daly’s ‘formidable’ performance as Greta.

Over a Friday phone call from New York, Daly spoke with me about her long career on stage and screen and the joys of Patrick Wang’s film-making. In conversation she is personable and down to earth, her comments regularly punctuated by earthy laughter. Given her surname, it’s no surprise to learn that Tyne has Irish roots.

“We’ve been in the US for several generations but we still like to claim the fun part of being Irish,” she declares. “Our forebears were from Limerick and Kerry. McGillicuddy Reeks is as far back as we can go; there was a James Daly, which is the same name as my dad. He married the baron’s daughter or something and they ran off, it was very romantic. I first went to Ireland in 1981 with my two sisters, Pegeen and Mary Glinnis. We drove from Dublin to Mizen Head and on up to Galway and when we weren’t fighting we were laughing, it was very Irish!” 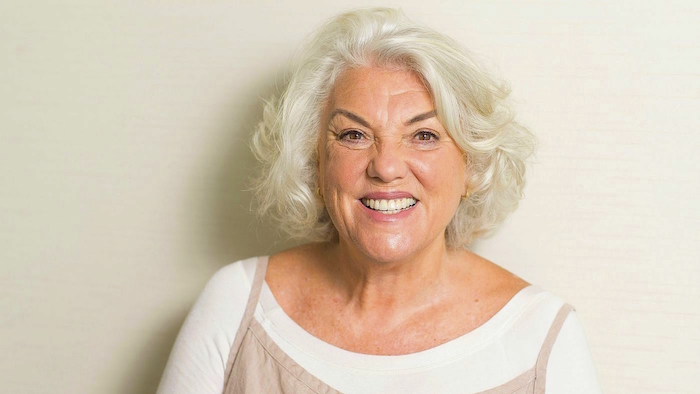 As both Daly’s parents were actors, I ask whether her sister Pegeen was named in honour of Synge’s heroine of Playboy of the Western World? “What play do you think they were doing in college?” she replies with one of her engaging laughs. “My dad was directing, my mother had red hair down to below her rear end and they named my sister Pegeen Michael Daly so we can guess what the play was.”

“It’s a double-edged sword to be an actor’s kid,” Tyne continues. “For a long time people would ask did I get my talent from my parents but around my mid-thirties I realised that I didn’t get my talent from my parents, I got it from the same place they did, which is from The Talent Giver’. It was shortly after that I got Cagney and Lacey and that was a breakthrough as regards claiming my own space.

'I was never one to say ‘I don’t do TV because I am a movie actor or I don’t do theatre because I do TV’, that’s all nonsense'

"I recently went to Japan with my granddaughter Hanna and we saw kimono makers and guys who did wonderful inlaid wood and potters, etc, and they all spoke about their origins and said ‘My father was a kimono maker and so was my grandfather, and so on’. I thought, ‘Oh I work in the family business too’. Two of the four of us are actors, and one sister married a composer and one married an actor so none of us fell far from the tree. My brother Tim and I did a play together last year in New York which was just wonderful.”

While she remains best known for her screen roles, the stage has been a strong part of Tyne’s career; “Theatre is about words and I am a language person, not a visual person,” she observes. “I was less interested in being known for my looks – I was cute for a while but that doesn’t last - than being known for my interpretation of feelings. I wanted to do everything, I am very, very, greedy; I wanted to do films and theatre and television and radio; everything. 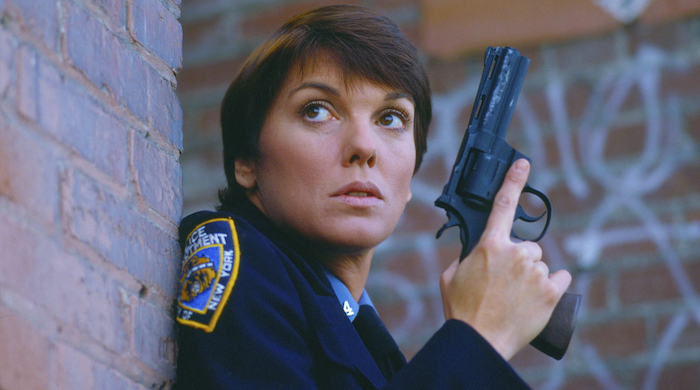 "The thing about the theatre for actors is that it is language, and, secondly, you are in the same room as the people you are telling the story to, which is better than being on television and they are at home doing the laundry while looking at your work. Each type of acting is interesting; each one has its value. They can save the movies for ever; the theatre is in the mind of the people who were there on a specific night.

"I was never one to say ‘I don’t do TV because I am a movie actor or I don’t do theatre because I do TV’, that’s all nonsense. It is all the same activity, which is pretending you are somebody else and taking on their shoes and their skin and interior organs and presenting it to an audience.”

Tyne will always be linked to Cagney and Lacey and her onscreen partnership with Sharon Gless. The series ran from 1982 to 1988, there were four TV movies in the 1990s, and Tyne and Gless have remained good friends ever since. “We knew of each other from being on the circuit in LA but we first met at a wrap party for the original TV series of Roots,” Tyne recalls. “When we got cast together in Cagney and Lacey it was important for us to be good friends because the powers-that-be were happy to divide and conquer in terms of casting and of women, they wanted to see a bitch fight between the two actresses.

"We were both in our mid-thirties and had been on the scene for a while and I said to Sharon ‘the only way we are going to survive this thing is if you have a problem come knock on my trailer and if I have one I’ll knock on yours. We have to talk it through and present a united front.’ In doing that we became really good pals; she is a wonderful woman and I talk to her quite a bit – she was in town just a couple of weeks ago and we went to dinner. We’re good friends, it doesn’t always happen.” 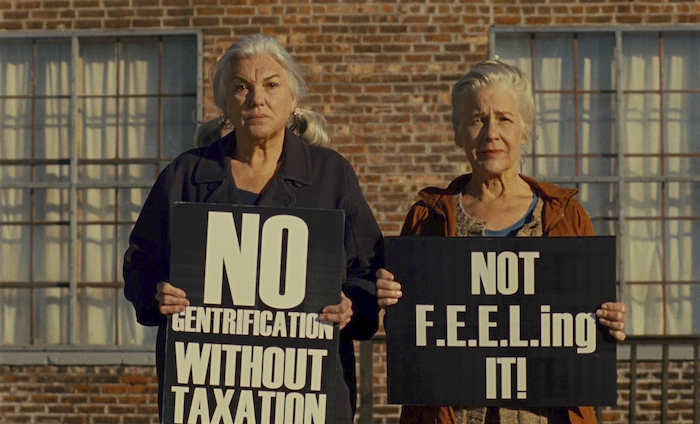 Tyne’s role in A Bread Factory arose after she saw Patrick Wang’s film In The Family; “I loved that movie,” she states. “I was very taken by the time that Patrick took in it and his willingness to really look at people in repose and people who were thinking and who are processing what’s happened to them rather than jumping all over the place. We live in a loud, frantic world that’s very busy and the older I get the more I like to slow down.

"Afterward, I met with Patrick and he told me had a movie he was about to make that celebrated the theatre and those workers who never get very much back from it except that they just love it and it fills their lives. I thought ‘Oh my God, this man’s making a movie about theatre and he has hunks of the classic Greek plays, he goes way back to our origins. I just thought it was spectacularly daring and challenging. We made it very quickly, in 28 days, and with a lot of people and it was a labour of love on all our parts.” 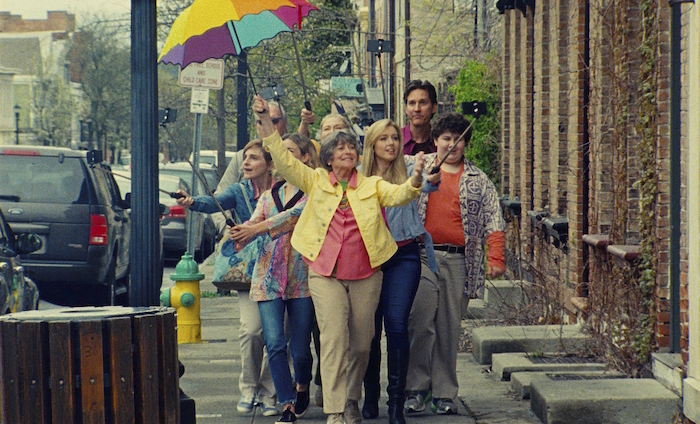 The film’s celebration of community theatre struck a chord with Tyne and her own beginnings as an actor. “I had my young life challenged and enriched and saved in some way by The Antrim Players in Southern New York which was a local theatre," she says. "I started when I was about 10, I was doing make up; then I went to another local theatre a little later and designed sets and did lighting. It was a classic apprenticeship up through the ranks and the kind of thing that lasts forever in the lifetime of a young creative person so this film is a homage to that world. I have a soft spot in my heart for amateur, local theatre.”

Fleadh audiences will be sure to delight in seeing A Bread Factory (Part One is on Wednesday July 10 at 8.30pm; Part Two is on Thursday 11 at 8.30pm ) at the Pálás, and, as an extra treat, the festival will also screen Cagney and Lacey’s season six two-part finale (Thursday 11 at 1.45pm ), also at the Pálás. Tyne Daly will be present at the above screenings and take part in Q&A sessions afterward. For more see www.palas.ie