IT IS that time of year again when one can ‘caper nimbly to the lascivious pleasing of a lute’, to paraphrase Shakespeare, as Galway Early Music Festival brings us a feast of medieval melody over the coming weekend May 24 to 26.

This year’s theme is ‘A Song and a Dance’ and, in a full three-day programme of concerts, talks, dance workshops, and exhibitions, the music will range from baroque Spanish and Portuguese dance music to mediaeval French dancing songs. Highlights include mezzo-soprano Sharon Carty’s scintillating programme of ‘Suitcase Arias’ in a concert partnered with Music for Galway; Obsidienne et Compagnie exploring medieval French dancing songs; The York Waits raising the roof with shawms, curtals, sackbuts, recorders, and pipes; The Gregory Walkers and dancer Kelsey Schuhle mixing it up with baroque and traditional music and dance from Ireland, England, France and Spain; and Yonit Kosovske, Vlad Smishkewych, Redmond O’Toole and dancer Yovanna Torres Blanco with baroque Spanish and Portuguese song and dance – rhythmic, flamboyant and bursting with passion.

Ahead of the Festival commencing I met its founder and director, Maura Ó’Cróinín [pictured below], and Galway Civic Trust’s Michael Quinn, whose organization is participating in several events, to get a flavour of what to expect.

“The festival started in 1996 so this is its 24th year,” Maura began as she traced its evolution. “It started very small and the York Waits, who are coming this year, were our only international act in that festival. It has now expanded into an international music event and we attract both a national and international audience to Galway. One area that has really expanded is the presence of Irish professional early music groups. Early music is now practiced as part of the classical music stream in Ireland far more than it was 24 years ago and we think we have had some part in that.”

'In aristocratic circles learning to dance was as important as training in the use of weaponry and horse riding. It was an important way of mixing socially'

Speaking about the theme, Maura says: “Initially we were just going to do dance but then we got the opportunity to have singer Sharon Carty, in partnership with Music for Galway, and we knew we could not turn down the opportunity for her beautiful programme Suitcase Arias, on Friday May 24 at St Nicholas’s. Once we decided to add song to the festival it worked out really well because in our programme we have a number of concerts where we have dancers taking part with singers. In one of them, on Saturday at 4pm in the Mick Lally Theatre, we have French group Obsidienne et Compagnie [pictured below] presenting Chansons à Danser, ‘Songs to Dance to’. It features songs and dances that were widely popular from the Middle Ages up to the 17th /18th century and continue to be so in small villages up to this day in Brittany.” 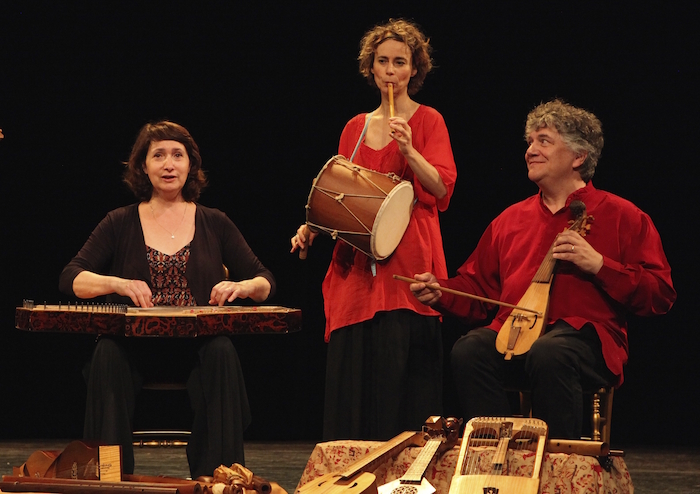 Maura highlights the social importance of dance in the medieval era; “The dances featured in our various events over the weekend would have been done across the social gamut from ordinary people up to those at court, then there would be specifically aristocratic dances like the volta. Dancing was very important socially; every kind of celebration was accompanied by dancing.

"In aristocratic circles learning to dance was as important as training in the use of weaponry and horse riding. It was an important way of mixing socially and displaying one’s place in society. It’s odd therefore that dance music is not part of more festivals. It’s interesting that in Ireland we do not have a native word for dance yet there was definitely dancing here. Some of the tunes in John Playford’s 1651 collection of dance airs have Irish names so they definitely came from here.”

Festival goers will have a chance of trying out some of the steps to those very tunes at the Playford Country Dance event on Sunday afternoon at the Mick Lally theatre when Felicity Maxwell, backed by The York Waits [pictured below], will teach sample olde-worlde dances from England, Scotland and Ireland. Another dance workshop, Bransles and Farandoles, with live music for all comers will showcase medieval and Renaissance dancing (Lise Carrel, teacher, and Jacopo Bisagni, pipes ) at Saturday, 12 noon, in the Mick Lally theatre and, an added attraction, admission is free. 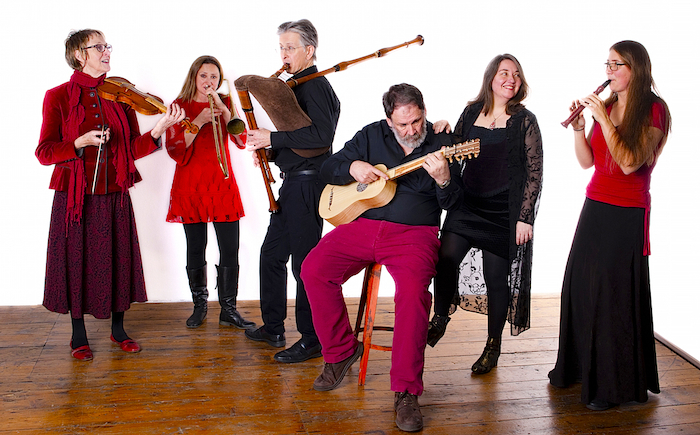 Galway Civic Trust are teaming up with Galway Early Music Festival on a quartet of events and the trust’s project co-ordinator, Michael Quinn, told me how they came on board; “We’re a heritage based organization and all year round we promote Galway through tourism and particularly its medieval heritage so it was a natural progression for us to get involved in the festival. Galway’s mediaeval story is the foundation story of the city.

'As we prepare to go to the polls in a European election, and at a time of rising anti-EU sentiment, Dancing At The Crossroads at the Mick Lally Theatre, offers a salient reminder of the long history of international cross-cultural inspiration'

"We were looking at a way of bringing that to a bigger audience through a one day event that would celebrate that heritage. We pitched to Galway 2020 and its Small Towns Big Ideas programme with the idea for a medieval festival which they liked and we then approached Maura, who we have worked with before on things like Culture Night, to see could we combine the idea with the Early Music Festival and so the Saturday will be a Medieval Experience Day.”

Michael outlines the events the trust is involved in; “We have several shared events as part of the Saturday programme. One of those is Music on the Streets which will see five different festival acts playing at different points around the Latin Quarter and it will be very colourful, bringing the festival out to the public. Also from 11am to 2pm in the Mechanics Institute, Simon O’Dwyer will be performing on Irish medieval instruments and giving a talk on them. Also, leading Irish medieval instrument makers will give a display and workshop in the Museum and we’re also involved in the Bransles and Farandoles dance workshop. 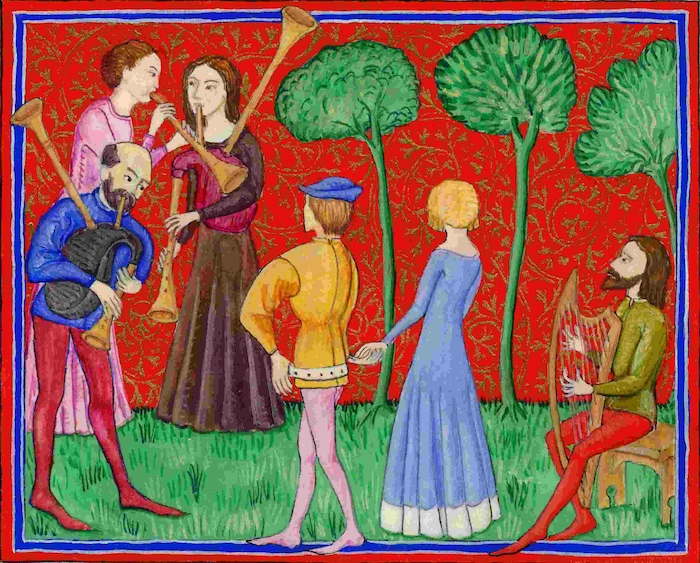 "As well as those, we have some family events, in the Mick Lally Theatre where we will have a talk and demonstration on life in mediaeval Galway which will be fun with people dressed up and the other one will be down in the museum courtyard which will be taken over by the Irish School of Historical Combat who will be doing clashes, melees and combat re-enactments which will be a great spectacle. That will be free also.”

As we prepare to go to the polls in a European election, and at a time of rising anti-EU sentiment, Dancing at the Crossroads (Sunday, 9pm, at the Mick Lally Theatre and featuring Kelsey Shuhle, dancer, with The Gregory Walkers ) offers a salient reminder of the long history of international cross-cultural inspiration and enrichment that is part of the continent’s legacy.

Throughout the 17th and 18th centuries Ireland adopted aspects of a cultural crossroads as European soldiers passed through the country, Irish soldiers returned from abroad, continental musicians were attracted to Dublin’s growing metropolis, and Irish music was published and adapted for Baroque tastes. In this concert the Gregory Walkers join forces with Irish dancer, Kelsey Schuhle, for a meeting of baroque and traditional music and dance from Ireland, England, France and Spain: hornpipes, chaconnes, folías and more will feature on the melodious menu.

The Galway Early Music Festival certainly packs in a bumper helping of musical and Terpsichorean delights over what promises to be a marvellous medieval weekend. Full details are via galwayearlymusic.com/festival-events