ONE OF the highlights of last year’s Galway International Arts Festival was Druid’s production of Sonya Kelly’s scintillating comedy, Furniture. A big hit with critics and audiences, it makes a welcome return to the Town Hall Theatre next month as part of a national tour.

Comprising three short two-handers, all revolving around an item of furniture, Kelly’s play has lots of laugh-out loud moments, zinger lines, sharp insights, and moments of touching tenderness. “When we furnish our home we mark our territory and a huge underlying theme of the play is about physical territory and emotional territory,” Kelly [pictured below with director Cathal Cleary] observes of Furniture. “We decorate our territories with furniture. The furniture itself doesn’t know it exists, sometimes it travels on without us and we don’t know.” 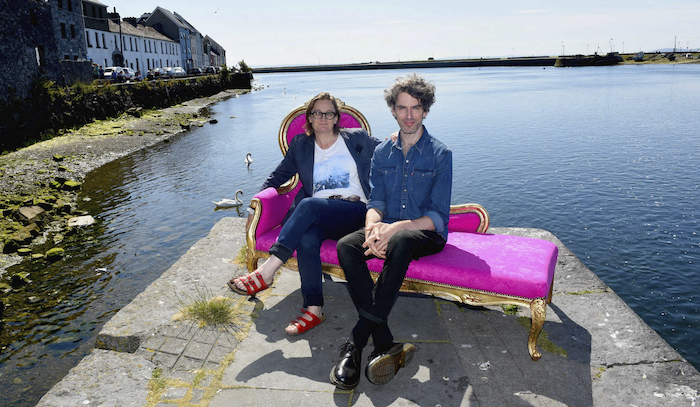 The opening segment of Furniture, entitled 'Bibendum', presents a married couple bickering at an art exhibition when the husband fears his wife was about to touch a valuable chair. The second section, 'La-Z-Boy', introduces a lesbian couple planning to move in together after just a few weeks of knowing each other, only to discover they have clashing values regarding interior design. The final playlet centres on a dying gay man and his lawyer nephew who is helping to sort out his will, while also trying to resist accepting his uncle’s cherished chaise longue as a bequest.

For the 2019 tour of Furniture, Niall Buggy and Garret Lombard reprise their roles in that third segment of the play and, during a break in rehearsals, Buggy spoke with me about the show. 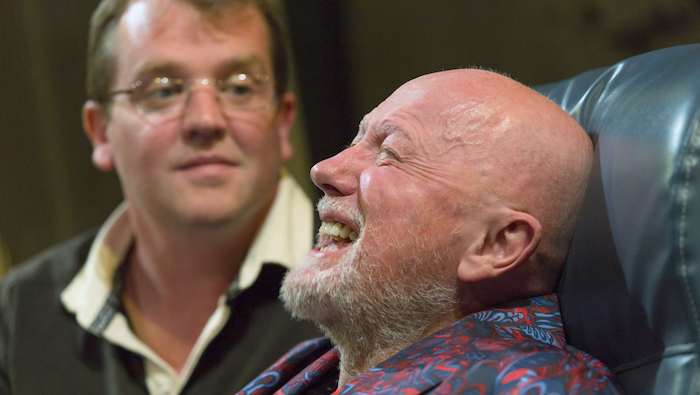 One of Ireland’s foremost actors, Buggy’s career is now in its sixth decade and his many acting accolades include an Olivier Award, an Irish Times Theatre Award, an Obie Award in New York, a Drama Desk Award, and a Clarence Derwent Award. Yet in spite of his haul of glittering prizes, Buggy is self-effacing and warmly down to earth.

While he is a born and bred Dubliner, Niall also has a special personal link with Galway. He enjoyed a close friendship with Siobhan McKenna who took him under her wing when he was a young actor at the Abbey. After her death he was given her Claddagh ring which he often wears; indeed he wore it onstage in his recent appearance at the Town Hall in On Blueberry Hill.

‘Barbra Streisand sat on it. Rudolph Nureyev sat on it… Judy Garland passed out on it!’

“Siobhan’s family gave it to me after she died,” he tells me. “I first met her in 1967 when I joined the cast of The Loves of Cass Maguire, which Siobhan was doing at the Abbey at the time. The day I joined, Siobhan arrived in the theatre and she said to me ‘I am so sorry, people are so rude, nobody has introduced us, tell me your name’ and I was so in awe of her I just replied ‘I’m Buggy’. She said ‘Buggy?!’ and she roared with laughter and she called me ‘Buggy’ ever after. I learned an enormous amount from her. Siobhan was a very important part of my life and I still miss her. Every time I go to Galway I go to her grave in Rahoon to say hello. We had great laughs. I was lucky to know her.”

Buggy’s love of theatre began in childhood when his father would take him to see such famous performers as Maureen Potter, Jimmy O'Dea, Michael MacLiammoir, and Jack Benny. I suggest to him that Furniture’s George is rather like him in this respect; at one stage in the play George declares of his prized chaise longue that it once belonged to Danny La Rue and that ‘Barbra Streisand sat on it. Rudolph Nureyev sat on it… Judy Garland passed out on it!’

“Yes I suppose he is like me,” Buggy chuckles. “I somehow imagine that George might have been a dresser in theatre. He obviously has a great knowledge of musical theatre. I love musical theatre as well and would love to do some more of it." At this point our interview is briefly interrupted by the sound of Buggy’s dog barking in the background. As he apologises for the noise, Buggy quips “George would like this dog I think, it is a little white dog, a mix of poodle and bichon frise. Maybe I’ll bring him onstage some night!”

'Sonya Kelly has great rhythm as a writer, she really understands it. Also she writes wonderful dialogue for us'

While Buggy has been in big films and acted with screen legends like Fred Astaire, Meryl Streep, and Richard Gere, his own big roles have nearly all come in theatre. A measure of his versatility can be gleaned just from some of the roles he has taken on for Druid; as a bathrobe-and-swimwear bedecked suitor in Enda Walsh’s Penelope, the fearsome, bullying, father in Tom Murphy’s Whistle In The Dark, from DruidMurphy, and now the flamboyantly gay George where Buggy reunites with one of his four ‘sons’ from Whistle In The Dark, Garret Lombard.

“We’re very different in this play than in Whistle,” Buggy notes with wry amusement. “One of the joys for me not long ago was when to see Druid’s Waiting For Godot and there were the four sons from Whistle and I thought ‘Oh they haven’t done too badly’. The father in Whistle is a monstrous man, but it was a great part and it is a great play. It was an incredible experience being part of DruidMurphy.”

Returning to Furniture, Buggy wraps up our chat with his assessment of its author Sonya Kelly’s attributes as a playwright. “She has great rhythm as a writer, she really understands it. Also she writes wonderful dialogue for us and dialogue is difficult to do but she surpasses herself with it. And in all three pieces, they are all great parts for the actors.”

Furniture is directed by Cathal Cleary and alongside Niall Buggy and Garret Lombard, the cast includes Kate Kennedy, Rory Nolan, Ruth McGill, and Helen Norton. It is at the Town Hall on Friday April 5 at 8pm and on Saturday 6 at 2.30pm and 8pm. Tickets are €26/22 from 091 - 569777, www.tht.ie