WHITE LIES will take to the stage of the Róísín Dubh in the final 24 hours of Britain’s membership of the European Union. Even if Westminster seeks an extension, the band knows it will be little other than postponing what is a threat to the livelihoods of all touring musicians.

For bands like White Lies - from west London, one of the most ardently Remain parts of England - Brexit is not the path to the “sunlit uplands”, but a future of tariffs, taxes, borders, and a restricted ability to earn money from their art, especially if there is a no deal Brexit.

“It’s very uncertain times,” bassist Charles Cave tells me during our Thursday afternoon interview. “We had a meeting this morning with the merchandising people. With Norway and Switzerland not being part of the EU, we’re not allowed bring merchandising there when we go into those countries, as there are tariffs imposed on each item of merchandise we would bring in.

“If we have a no deal Brexit, then that will be the case in almost every European country we play in. If we did bring in the merch, we would end up paying more money in tariffs than we would make in playing the gigs and selling merch at the venue. And that’s only a tiny aspect. We’d also have to get separate work visas for every country we enter. All of that is unthinkable. So we’ll just have to wait and see.”

One last party before Brexit? 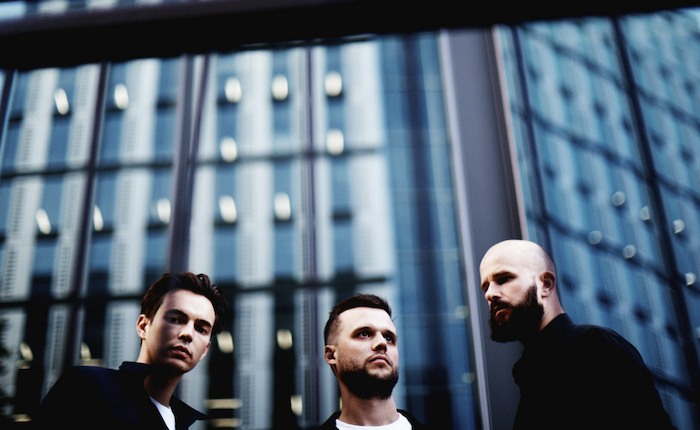 White lies - Cave, Harry McVeigh (lead vocals, guitar ), and Jack Lawrence-Brown (drums ) - are currently touring Europe in support of their new album, Five, released last month, with the Róisín Dubh show taking place on Thursday March 28. The tour has already taken in Holland, Belgium, Germany, Norway, Denmark, and Poland, and Charles admits there is an almost “one last party before Brexit” feel to the tour.

“We’re going to be soaking up and enjoying as much of this tour as possible,” he says. “Touring in northern Europe is our favourite kind of touring, where we play a city and spend the following day as tourists, get out before 11am and enjoy ourselves, and on this tour we are going to do that more than ever, just in case that changes because of Brexit.”

'With Five, we had a newfound confidence to experiment and say ‘Let’s see what comes next’ and doing what we felt like. We had the freedom to be who we are'

And Galway is a city Charles is looking forward to playing, and going out in, especially as he has close friends here. “I’ve always wanted to go to Galway,” he says. “I know its reputation for being a creative place, it seems to be a hub for some of the best Irish writing, and I always feel excited about a place that has a buzz around them, a history, and culture. I also have a friend from Galway who is a fiction writer, Conor Montague, he’s a great guy, so I hope to catch up with him in Galway. So yes, I will be doing the tourist thing in Galway.”

The freedom to be who we are

White Lies have won much acclaim since the band emerged a decade ago with To Lose My Life…. Four albums later and Five has earned some the trio’s best reviews to date. It also marks a shift towards a more sonically expansive, and stylistically diverse, approach, taking in elements of stoner rock, jazz, and pure pop, alongside their trademark dark and atmospheric post-punk.

“Every album we’ve made,” says Charles, “we’ve taken more and more control of, and have had more freedom with. We’re very proud of the first record. We made it when we were 19, we were with a major label, they did a lot of the guiding process with us, they got the producer, the studio, all of that. We were like rabbits in headlights and we needed that guidance, but since then we have taken the reins more and more, and it laid the foundations for which we could do this one.

“With Five, we had the meat and potatoes of it well locked down, and we had the confidence to try different instruments. A song like the opener, 'Time To Give’, wouldn’t have happened on the previous record, which was just about getting something recorded. This time we had a newfound confidence to experiment and say ‘Let’s see what comes next’ and doing what we felt like. There were so many moments when we were so sure of the songs that we could trying out things, like the jazz piano at the end of ‘Kick Me’. We had the freedom to be who we are.”

One of the singles from the album, ’Tokyo’, which boasts a chorus equal parts earworm and anthem, reveals a light-heartedness not normally associated with White Lies. “There is a certain level of idiocy and simplicity in the best pop music,” Charles declares. “Pop without humour falls flat. That’s the problem with a lot of chart music today, it’s so falsely earnest and there is no joy in it. If you look back at The Spice Girls, they had that kind of idiocy, and that’s something which I really approve of.

'The thing is, we’ve been making music for longer than White Lies has existed. We’ve been together in bands since school'

"With ‘Tokyo’ we were able to include that foolish sensibility. We were writing from the perspective of a guy whose girlfriend is leaving him, and his reaction is, ‘Where are you going to go?’ and he starts talking about Tokyo and Jupiter, saying all these silly things to her. It’s interesting to sing songs from the perspective of people who are not admirable. White Lies have written a lot of quite serious songs, but we think there is a bit of tongue-in-cheek in what we do. Our music often gets called ‘Goth’, but ‘Goth’ has a really silly side - people using all that face paint, it’s like a clown, and there is the element of the arty, poetic, and fantastical.”

Five, as previously noted, marks the band’s 10th year together, although as Charles points out, he, Harry, and Jack, have been together for longer than White Lies has.

“It’s a weird one,” he says. “Some days it feels like 10 years, other times it feels less, other times it feels more. Time gets very disorientating when working with such an abstract thing as a band. It’s not like an anniversary of a marriage where is a real date, and you latch onto that date, and count the years from that day. The thing is, we’ve been making music for longer than White Lies has existed. We’ve been together in bands since school, but there is a nice, natural, continuation from the days when we were mucking about in Jack’s bedroom with instruments. I think it will be much later that we will reflect on these things and look back.”

Doors at 8pm. Tickets are available from www.roisindubh.net; the Ticket Desk at [email protected], Shop Street; and The Róisín Dubh.