THE GREEN Book was a guide for black people in America who were traveliing south in the 1960s, containing names of hotels and restaurants that were friendly for the 'Negro Traveller'.

This film is based on the friendship of Don Shirley, a black New Yorker musician, and Tony Vallelonga, a tough talking wise guy from the Bronx. Shirley is heading on a tour of the South, and needs a driver, who can also double up as a body guard. Tony is a racist but as time goes on, his feelings begin to change as his friendship with Shirley develops.

The film was written by Nick Vallelonga, son of Tony, and he has written a shallow script, the authenticity of which has been questioned by Don Shirley’s family, to whom he never even spoke to when writing it. In the film, Tony tells Don his nickname 'The Lip' comes from his ability to bullshit. Well it seems his son certainly inherited that gift.

Green Book was directed by Peter Farrelly, one half of the Farrelly brothers who had tremendous success in the 1990s with comedies like Dumb and Dumber and There’s Something About Mary. He is not a very talented director and I still cannot believe he was nominated for a Golden Globe over Yorgos Lanthimos, director of The Favourite. 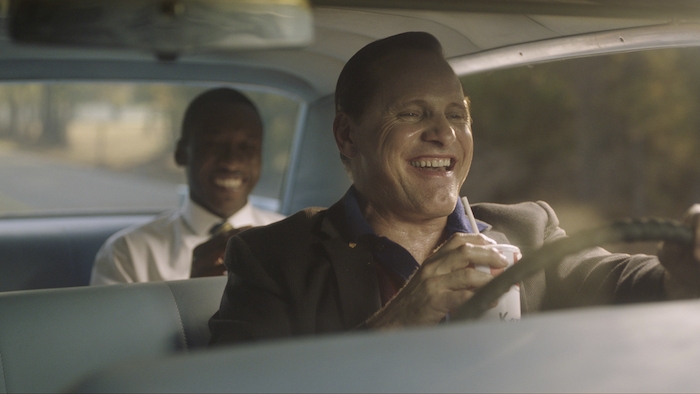 However, This film has been blessed by two of the finest actors working today giving two of the performances of the year. When someone is looking for an example of chemistry between two actors, Green Book will be the example I will offer. Mahershala Ali plays Don Shirley and is fantastic. He won the Oscar two years ago for Moonlight and could be about to win again for this. The real star here though is Viggo Mortensen. This is an absolute transformative role for him, he’s put on huge weight. It is a tricky role as Tony is racist, but Mortensen is able to imbue enough nuance into the character that he is revealed as a product of his time rather than a hateful person.

That said, if you believe the family of Don Shirley, and I am inclined to, they are essentially fictional characters. At the same time I loved spending two hours with these characters and enjoyed watching them interact. This is a really enjoyable movie but it is lightweight. I would be very disappointed if it beats Roma or The Favourite for best film at the Oscars. It reminds of me Driving Miss Daisy or Remember The Titans - shallow but very enjoyable and funny.