JOHNNY DUHAN'S newly published book, The Voyage, has something of a confessional feel to it, the black dustjacket with Johnny in profile as if in prayer, sets the tone for what follows.

It comes as no surprise then, that there is a chapter devoted to the Confessions of St Augustine, along with several references to other spiritual writers such as St Teresa of Avila and Teilhard de Chardin. In fact, the reader could be excused from seeing resemblances between The Voyage and Cardinal Newman’s Apologia Pro Vita Sua.

While it is imbued with a strong spiritual voice, this is only part of what is an intriguing book which has multiple themes running through it, such as Duhan’s own upbringing, particularly his mother’s mental breakdown and recovery; his life as a songwriter in all its vicissitudes; his disappointments, which were many; and various legal battles. As our voyager moves from port to port, suffering “the slings and arrows of outrageous fortune”, there is a sense of achievement initially lurking beneath the surface, which slowly but surely surfaces, fuelled by Duhan’s strong integrity, his absolute self-belief, and the support of his own immediate family.

Duhan’s prose is straightforward and honest, and his strong narrative bears strong witness to the less attractive elements of the professional singer-songwriter’s life in Ireland for the last 30/40 years. Describing the morning after a gig, when totting up his taking, he “calculated that my profit for the night was roughly €120. Measured against two days travelling plus practice time, the sum amounted to mild depression”. Even here, directly after breakfast, he travels to nearby Ballybunion beach where he and his wife had courted many years earlier and found solace in the memories.

Despite the fact the book took 17 years to write, it maintains a certain unity, and from the moment of “mild depression” there is a lift in the rhythm and atmosphere of the book, peopled as it is with a number of successes in the courts, as well as on the stage, culminating on the Foyle River where, on a floating raft, he gave an inspired version of his classic song 'The Voyage'. In terms of performance it was perhaps his finest hour. It comes as no surprise this chapter is entitled 'Love Is A Boat'. 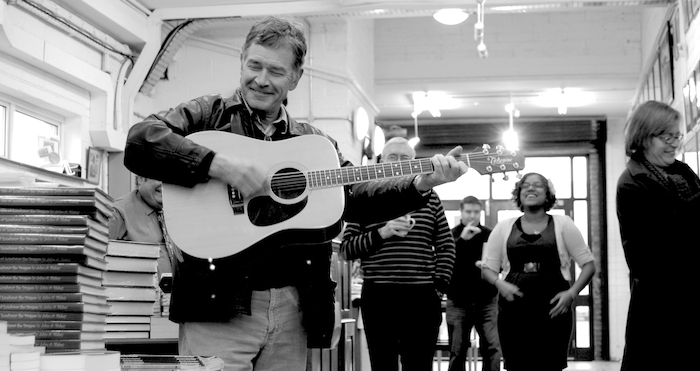 Nor does it come as a surprise that the penultimate chapter underlines the most important element of his life, his crew who have sustained his voyage from port to port. Here, Duhan brings his two granddaughters for a walk in Barna Woods. They discuss the trees, the birds, and the flowers. Finally as the conversation reaches an awkward spiritual level and Duhan asks Kate a difficult question, "she gave me a puzzled look and got to her feet. ‘Come on, we’d better get home. The dinner will be ready and Momum will be mad if we are late again'”. The voyage continues.