MARY STUART returns to Scotland in 1561 after being married off at a young age to a French prince. Her husband now dead, she has returned to make a claim on the English throne.

She says she has no quarrel with the current monarch, her cousin Elizabeth, but is demanding she, or her child (assuming Elizabeth sires no heir ), be named next in line. Elizabeth, being Protestant, is advised against this due to Mary’s Catholic faith. Mary and Elizabeth are surrounded by duplicitous men - husbands and advisors. They attempt to ally with one another but are constantly undermined by their court, and the only outcome is civil war.

Saorise Ronan playing Mary is incredible, I think it is fair to say now, even at her young age, she is the greatest actor Ireland has ever produced. She is magnetic here, her confidence and charisma extraordinary. If you have seen her on The Late Late Show, you know she can do a great accent and thus her Scottish brogue is perfect (although shouldn’t she have a French accent? ).

Margot Robbie as Elizabeth is an excellent foil, but she is all make up and costume and unfortunately not given a huge amount to do. While this is being advertised as a double bill, it is Saoirse’s movie really. The supporting cast is great. David Tennant cartoonishly chews scenery as John Locke and is hilariously grotesque.

The film is produced by trendy theatre company The Donmar Warehouse and it is incredibly stylish. I’m here for that, I do not need pinpoint historical accuracy when it comes to this kind of thing. Wolf Hall adaptation on the BBC should have been one of the best shows it has ever produced but director Peter Kosminsky, a slave to realism, tried to be too clever. He used only natural and candle light and real life locations. In an attempt for authenticity he made the story look cheap and forgetable. 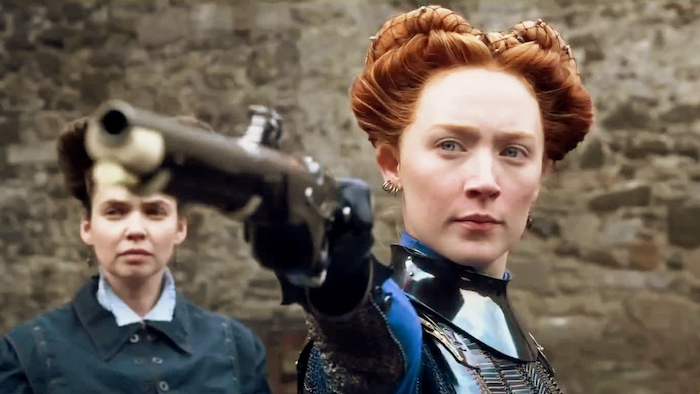 Josie Rourke the director here, has a brilliant eye for colour and costume and her experience as artistic director at the Donmar has her well prepared for a period drama. There are undercurrents of modern politics and feminism here, but they are slightly undone by the film's obsession with fertility and virginty.

Despite all these positives, the film ends up being less than the sum of its parts. I was not surprised to see Mary Queen Of Scots was written by House Of Cards' Beau Willimon, a series, in my opinion, that is a style over substance mess. Overall this film looks great, but the emotional and intellectual depth are lacking.

Mary Queen Of Scots is certainly hurt by coming out a few weeks after Yorgos Lanthimos' The Favourite (interestingly Mary is the great great great Grandmother of Queen Anne in The Favourite ). Which is still in most cinemas. Go see that instead.