AINDRIAS DE STAIC is a man who can look back with pride and forward with purpose as an artist. Yet, it is also through looking back that he has found he will be able to move forward as a man.

Last week Aindrais saw his show, The Man From Mogaga - about an individual who travels the world, only to come back to the town where he felt he never fitted in, to help the local team win the GAA championship - win Best Comedy at the Celtic Media Awards. Aindrais first presented the show on stage in 2013 and 2014, but the award was for last year’s radio adaptation and broadcast on Newstalk.

It’s a great achievement for the actor, writer, storyteller, musician, and actor, but, when I meet him for the interview, he’s less concerned with basking in the glory of past work, than in discussing his latest show - Seven Deadly Shtax, which he brings to the Róisín Dubh on Saturday May 19 at 8pm, followed by a gig with his band The Latchikos.

Aindrais’s previous shows, Around The World On 80 Quid and The Man From Mogaga, involved the main character going on a journey across countries and continents, as a means of self discovery. Why is this theme so prevalent in his work? “I am ‘generation emigration’ of the 1980s,” he replies. “So many of my friends lived overseas. There was some work in Galway and Dublin, but outside of that there was nothing, so you had to go to Melbourne, Sydney, Abu Dhabi. The Man From Mogaga is about that generation. My father had to go America to get published, my mother’s family were in England, and most of my generation are in Australia or London.”

It was on his journeys that Aindrais began to fully explore his gift for storytelling, acting, and music. “I had to give up the drink so I wondered, what was I going to do with my time?” he says. “So I went and played open mics and performed music in Greek restaurants. The Aussies love the Irish accent, so I’d play tunes and then tell a story in-between. The more I told stories in-between the music, and saw how they complemented each other, I became more confident about putting tunes and stories together."

Seven Deadly Shtax also involves a journey, but this time it is inward, involving the conversations among three men who happen to find themselves sitting together one day. Mixing a contemporary take on the seanchaí tradition, with comedy, and music, the show is an interrogation by Aindrais of his own personality and behaviour, and what it means to be a man in 2018.

“The concept of ‘men’ and ‘masculinity’ is getting a lot of stick these days,” say Aindrais, but instead of a defensive ‘doubling down’ and the fear of feminism some men retreat to, Aindrais wants to meet the challenge head-on.

'I believe there is male and female in all of us. I know many women who have a great masculine energy. You can be more of a man by expressing your femininity'

“I’m about 10 years off the drink, but I can still be greedy, I still eat too much, I can still act the bollix. Men’s behaviour is being examined as never before, so I thought I’d look at that through the traditional ‘Seven Deadly Sins’ - pride, greed, lust, envy, gluttony, wrath, and sloth. I wanted to go a bit deeper and examine the Seven Deadly Sins in my own life - like lust, when you’re looking at women; greed, when you want more gigs; gluttony, when you want more chocolate - it’s about looking at how I can improve my life, as I’m sceptical about yoga enters and self help books, there being so many cowboys in the self-help arena.

“I wanted to look at men curing themselves through stillness, being together, and getting in touch with Mother Nature. This show is “self help for people who want to help themselves, and using the power of music and nature in terms of therapy". 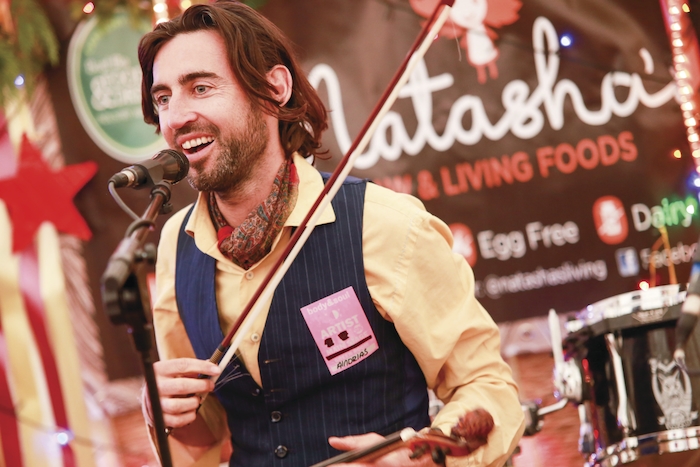 So how does Aindrais feel that this combination of conversation, music, and a re-connection with Nature can be beneficial to men? “In Poland they are fascinated with the forests. In Ireland, it’s more to do with the sea,” he says. “Some things are natural to us, having stayed with us from the hunter/gatherer days - fishing for example. I remember I was out fishing with the lads. There were three of us, and there was no hard man talk and no talk about football, we were just listening to the sound of nature and enjoying being together. There’s something very rewarding about that experience and I think it’s very healthy for us.

“Music and creative expression can help us move away from the hard talk and hard man behaviour, and instead go towards a deeper understanding of the self, and of women. Through the arts, men can embrace the feminine. I believe there is male and female in all of us. I know many women who have a great masculine energy. You can be more of a man by expressing your femininity. I believe I can be more of a man playing music. It’s about finding your real and deeper self through expression, the arts, and Mother Nature.”

Seven Deadly Shtax runs for about 45 minutes, which Aindrais says will be “a storytelling experience. It’s not too deep, but it’s not just one line comedy, it’s old-fashioned story telling and craic, with fun and music.” A major inspiration is the aforementioned seanchaí tradition.

“This is when people would go to a house and not mind waiting until dawn to hear the end of the story, or would come back the following day to get the end of it,” he says. “A lot of these were recorded in the 1930s. There was a musicality to their storytelling and a rhythm to the way they spoke or used and repeated phrases and words, and I love the dance between the music and the story. We love the poetry and the music and the comedy that is in this kind of storytelling. The closest to it these days is Tommy Tiernan. For the digital age, when everything is instantaneous, people have to be aware it's a long form narrative. It’s not quick fire comedy. I’m using a traditional style to tell a contemporary story.”

Tickets are available from www.roisindubh.net; the Ticket Desk at OMG Zhivago, Shop Street; and The Róisín Dubh.