When I’m discussing planting plans with clients they’re sometimes nonplussed by the botanical names of plants, and it’s hard to blame them - after all, not many of us are familiar with Latin in the twenty first century. There’s a very good reason for using them, though, and it’s not just to baffle you with hard to pronounce tongue twisters.

Because botanical plant names are mostly in Latin, they are the same all over the world, so a Tetrapanax papyrifer, for instance, means the same thing to a garden centre in Galway, a nursery in the Netherlands, or a designer in Dubai. This matters when you think how often plants are grown in one country and sold to another. The use of common names, even when translated, can so easily lead to confusion. Let me give you an example.

Three plants with pretty blue bell-shaped flowers can be frequently found in this country alone. Muscari armeniacum, a spring flowering bulb, is typically used in pots and containers as a bedding plant. Hyacinthoides non-scripta, also grown from a bulb, appears in swathes or carpets of blue under woodland trees in late spring. Campanula rotundifolia can be found studding wildflower meadows and roadside verges with its delicate violet blue bells in mid to late summer. All three of these, and no doubt many more besides, are commonly referred to as ‘bluebells’ – but use the botanical name in a plant order or a planting scheme and any doubt or confusion is removed – because if the genus (the first part ) and species (the second part ) are used, they refer to exactly what it says on the tin, so to speak.

The system of plant classification and naming that we use today was first developed by the Swedish botanist Carl von Linne, or Linnaeus in the eighteenth century – an achievement that rightly sees him celebrated as a towering figure in scientific history. It’s also one that’s much appreciated today by everyone involved in the horticulture industry.

And – in Galway at least - we would call Textrapanax papyrifer the rice paper plant. 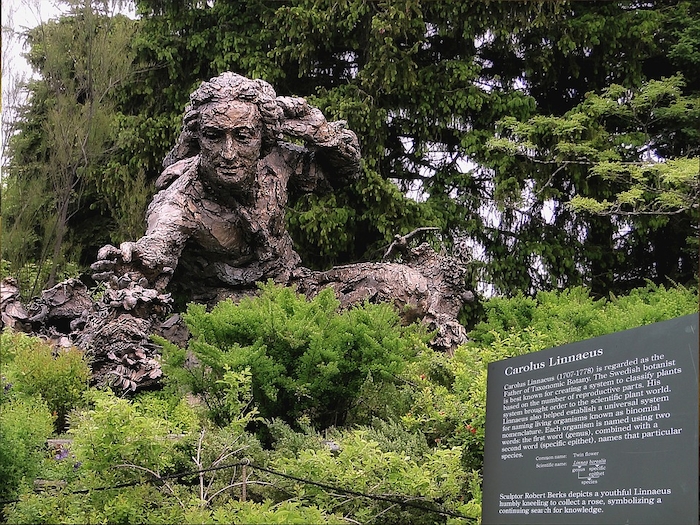 A garden sculpture of Swedish botanist Linnaeus, who developed the system for naming plants

Anne Byrne Garden Design provides easy to follow Garden Plans that you can implement right away or in stages. Anne’s design flair and passion for plants brings a touch of magic to gardens of all sizes.